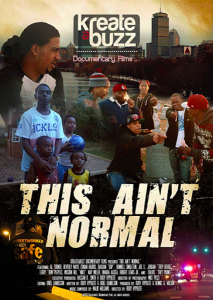 As part of our second year of the Dismantling White Supremacy Film series this documentary depicts the stories of gang-involved youth, entangled in the intractable violence haunting Boston’s neighborhoods, and the StreetSafe Boston social and street workers tasked with helping to transform their lives. This Ain’t Normal examines the individual circumstances behind the violence, thereby gaining a deeper insight and understanding into the issue of youth violence, as it has grown to epidemic proportions in the City on the Hill and the nation.