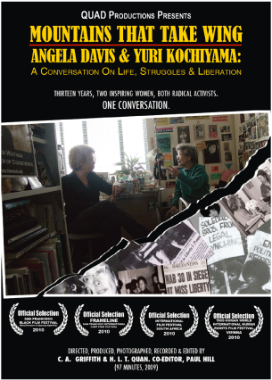 As part of our second year of the Dismantling White Supremacy Film series is this historically rich and unique documentary about two formidable women, Angela Davis & Yuri Kochiyama who share a profound passion for justice. This incredible discussion between these two prolific activist tell the untold story of the deep connection and support between both the black and asian movements to eradicate oppression.

“Thirteen years, two inspiring women, both radical activists-one conversation. MOUNTAINS THAT TAKE WING is a historically rich and unique documentary about two formidable women who share a profound passion for justice. Through conversations that are intimate and profound, we learn about Davis, an internationally renowned scholar, writer and activist, and 88-year-old Kochiyama, a revered grassroots community activist and Nobel Peace Prize nominee. Their shared experience as political prisoners and their dedication to Civil Rights embody personal and political experiences as well as the diverse lives of women doing liberatory cultural work. Illustrated with rarely-seen photographs and footage of extraordinary speeches and events from the early 1900s to the ’60s and through the present, the topics of this rich conversation range from critical, but often forgotten role of women in 20th century social movements to the importance of cross-cultural/cross-racial alliances; from America’s WWII internment camps to Japan’s “Comfort Women”; from Malcolm X to the prison industrial complex; and from war to cultural arts. Davis and Kochiyama’s comments offer critical lessons for understanding our nation’s most important social movements while providing tremendous hope for its youth and the future.”