Haitian Perspectives in Film with Michael Sheridan of CSFilms

Haitian-made documentary films go beyond the earthquake devastation and relief efforts to provide unseen local perspectives on the capacity of Haitians and the challenges they face. 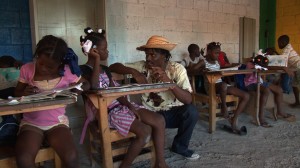 Inspired by the model of Community Supported Agriculture, Community Supported Film (CSFilm) applies the principle of investing in people on the ground by supporting the creation of locally-produced films.  The resulting products help nourish a deeper understanding of the world that isn’t available in the mainstream media marketplace.

In 2014, CSFilm conducted an intensive 5-week training of 10 Haitian women and men in documentary production.  A collection of ten remarkable short films, Haitian Perspectives in Film was produced during the training.  CSFilm founder and director Michael Sheridan will present a screening of these films and will discuss how stories told by Haitians themselves can augment our understanding of Haiti’s post-earthquake relief efforts and provide a chance for us to experience Haiti as it is lived by Haitian street vendors, business women, artists, and farmers.

Going beyond disaster reporting, these films will ensure the experiences and points of view of Haitians are included in the international conversation about what has and has not happened since the 2010 7.0 earthquake – one of the world’s worst disasters.  The films will also be used to increase dialogue and influence public policy internationally and in Haiti regarding effective foreign aid and sustainable development.