JIM VRABEL: A PEOPLE’S HISTORY OF THE NEW BOSTON 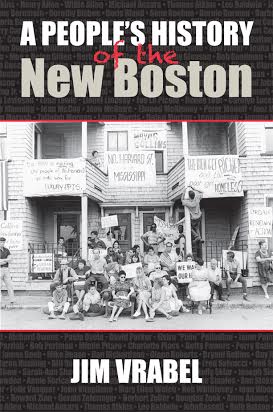 Jim Vrabel comes to the JP Forum to discuss his new book, A People’s History of the New Boston, which provides a grassroots perspective on the tumultuous 1960s and 1970s, when residents of the city’s neighborhoods engaged in an era of activism and protest unprecedented in Boston since the American Revolution.

Although Boston today is a vibrant and thriving city, it was anything but that in the years following World War II. Credit for the city’s turnaround is often given to a select group of people, all of them men, all of them white, and most of them well off. In fact, a large group of community activists, many of them women, people of color, and not very well off, were also responsible for creating the Boston of today.

Using interviews with many of those activists, contemporary news accounts, and historical sources, Jim Vrabel describes the demonstrations, sit-ins, picket lines, boycotts, and contentious negotiations through which residents exerted their influence on the city that was being rebuilt around them. He includes case histories of the fights against urban renewal, highway construction, and airport expansion; for civil rights, school desegregation, and welfare reform; and over Vietnam and busing. Vrabel tallies the wins and, and shows how much of the legacy of that activism remains in Boston today.

For more information or to buy the book online click here.

This message is only visible to admins.

Error: (#10) To use "Page Public Content Access", your use of this endpoint must be reviewed and approved by Facebook.
Solution: See here for how to solve this error