Lessons from the Truth School with Rev. Andrea Ayvazian 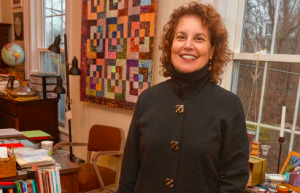 Shortly after Trump was elected, activists in Western Massachusetts organized a new activist school to teach skills needed to resist the Trump incursion. The Sojourner Truth School for Social Change Leadership teaches movement building skills, offering classes and training opportunities up and down the Pioneer Valley.

Come hear the Rev. Andrea Ayvazian, co-founder of the Truth School, share lessons for our community. Organizers connected to Roslindale is For Everyone (RISE) and others are exploring starting an activist school in several Boston neighborhoods.

The Truth School courses meet in donated spaces and all funds raise go to pay trainers so classes can be free and open to anyone.  The first two terms of course offerings have included activist skills such as public speaking, writing for mass media, song-leading, and nonviolent direct action. Courses also focus on mobilizing millennials, organizing beyond political silos, working across class divisions, self-care, and inspiration.

Teachers and trainers include government officials and community organizers. Former Massachusetts State Representative Ellen Story, for example, is teaching a class called “Preparing to Run for Office.” And Jo Comerford, the national campaign director for MoveOn.org, is teaching “Organizing 101: The Art of Structuring the Most Effective and Winning Campaign Goals, Strategies, and Tactics.” Other course offerings include: “And Still We Rise: Leadership Forum for Women of Color,” “Leading Songs of Protest and Resistance,” and “Spiritual Resilience and Resistance.”

See this article in YES! Magazine: “How to Go the Resistance Distance: Pop-Up Schools for Novice Activists”