Join the JP Forum for a book talk with Tom Hayden – one of America’s best-known voices of political and social activism. Based on unprecedented access to both Cuban and American officials, Listen, Yankee!: Why Cuba Matters offers fresh insight into one of history’s most enigmatic relationships between nations. 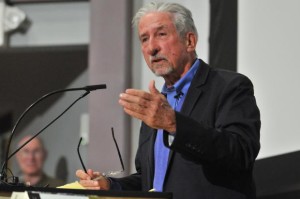 In Listen, Yankee!, Tom Hayden gives us two countries that share much more than a fifty-five-year disagreement. He writes both as an observer of Cuba and as a US revolutionary student leader telling his own story, someone whose efforts to mobilize political change in the US mirrored the radical transformation simultaneously going on in Cuba. His astute observations are often dazzling and always based on his years of research and special access to key figures.

Chapters are devoted to the writings of Che Guevara, Régis Debray, and C. Wright Mills; the Cuban missile crisis; the Weather Underground; the assassination of JFK; the strong historical links between Cuba and Africa; the Carter era; the Clinton era; the Cuban Five; Elián González; and the December 17, 2014 declaration of normalization by presidents Obama and Castro.

Hayden puts the present moment into historical context, and shows how we’re finally finding common ground to the advantage of Cubans and Americans alike.