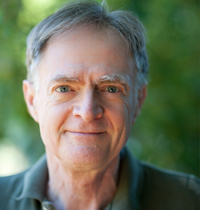 The JP Forum is thrilled to welcome back Richard Heinberg, one of the world’s foremost experts on energy policy and community resilience. Join us for this special morning with Richard and members of the New England Resilience & Transition Network.

Richard Heinberg is Senior Fellow-in-Residence of the Post Carbon Institute and is widely regarded as one of the world’s foremost educators on peak oil, energy policy and community resilience. At the Forum, Richard will explore the opportunities and challenges in the transition to a fossil fuel free future. Several energy analysts and environmental organizations have formulated plans for transitioning to 100 percent renewable energy. Richard Heinberg and David Fridley, staff scientist of the energy analysis program at Lawrence Berkeley National Laboratory, have gathered and assessed those plans, and in his talk Richard will discuss the future of clean energy and how the characteristics of ~100% renewable energy will shape our lives and economy.

Richard’s talk will kick off a day-long gathering of activists and organizers from around the New England region, folks building resilient local communities and resisting fossil fuel infrastructure. Stick around for lunch, workshops, and networking sessions. You’ll connect with great people, hear stories and lessons to strengthen your community work, help build the New England Resilience & Transition network, and get inspired! Read more and register here.

Richard Heinberg is Senior Fellow-in-Residence of the Post Carbon Institute. He has authored scores of essays and articles and twelve books. Since 2002, Richard has delivered over five hundred lectures to a wide variety of audiences in 14 countries—from insurance executives to peace activists, from local officials to members of the European Parliament. He has been quoted and interviewed countless times for print, television, and radio. Richard has appeared in many film and television documentaries, including Leonardo DiCaprio’s 11th Hour, is a recipient of the M. King Hubbert Award for Excellence in Energy Education, and in 2012 was appointed to His Majesty the King of Bhutan’s International Expert Working Group for the New Development Paradigm initiative. Richard’s animations Don’t Worry, Drive On, Who Killed Economic Growth? and 300 Years of Fossil Fuels in 300 Minutes (winner of a YouTubes’s DoGooder Video of the Year Award) have been viewed by more than 1.5 million people.