*Sandra Steingraber* Toward an Unfractured Future: Science, Civil Disobedience, and Feminism in the Fight Against Fossil Fuel Expansion 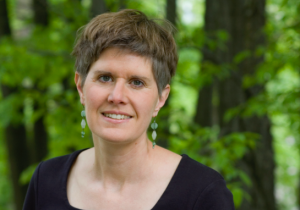 Fracking is a shock and awe operation that turns drinking water into a poisonous club that is used to smash apart our nation’s bedrock in order to extract inherently leaky fossil fuels: oil and gas.

Fracking’s infrastructure extends to the shale deposits of Pennsylvania, Texas, Oklahoma, and North Dakota, where the wells are drilled, to the hills of Wisconsin and Minnesota, where frack sand is mined, to the spiderweb of pipeline, compressor stations, storage depots, power plants, and LNG terminals that have industrialized our farmlands, harbors, wild lands, and urban neighborhoods far from the well pads—including those in densely populated New England.

All along the way, air is polluted, water contaminated, toxic waste generated, and public health imperiled—with the health and safety of women and children at particular risk. And greenhouse gases are added to the atmosphere, deepening the climate crisis.

This talk examines the science behind the social movement to secure an unfractured future for our children and the role that civil disobedience and feminist activism are playing in opening a space in the culture for that science to speak. 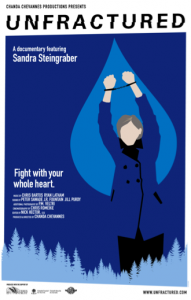 The award-winning documentary film Unfractured tells the story of the successful fight for a ban on fracking in New York State. Steingraber’s public lecture, which will immediately be followed by a screening of the film, will explore the science behind the scenes, women’s leadership within the movement, and ongoing tactics and strategies—with special focus on current issues here in Massachusetts.

Biologist Sandra Steingraber is co-founder of Concerned Health Professionals of New York, co-author of the Compendium of Scientific, Medical, and Media Findings on the Risks and Harms of Fracking, and science advisor to Americans Against Fracking.