Come hear from the defendants about their actions and join the conversation about their strategic use of the climate necessity defense and opportunities to apply lessons learned in the West Roxbury Lateral pipeline resistance.

The Climate Disobedience Center exists to support a growing community of climate dissidents who take the risk of acting commensurate with the scale and urgency of the crisis.

In these perilous times, we continue to see acts of bravery and determination standing up to the chaos status quo. At the end of this month we invite you to stand with 12 amazing individuals who heeded the call to bold and determined climate action and blockaded construction on the West Roxbury Lateral high-pressure fracked gas pipeline. They will go to trial on

Those thirteen, including Climate Disobedience Center co-founder Tim DeChristopher and Director of the Center for Earth Ethics of at Union Theological Seminary Karenna Gore, were among nearly 200 others who were arrested as part of a massive campaign that stopped construction for nearly two months and attracted the support of neighbors, members of Congress, state legislators, and city counselors.

This will be the first climate necessity case in the United States in two years, and climate champions and experts, including Bill McKibben and Dr. James Hansen, are planning to testify to make the case that we are in an emergency, and emergency measures – even if they break existing law – are justified in order to prevent a greater harm.

Trials can be unpredictable, and these twelve deferents run the risk of their case being dismissed on the first day. This would rob them of the opportunity to advocate on a public platform against the dangers of climate change and this dangerous pipeline. These brave defendants deserve to have their stance recorded and share their thoroughly prepared testimonies. Along with many expert witnesses. 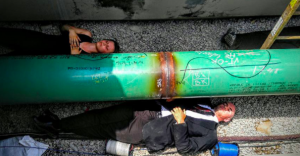 Here are a list of ways to show your support HERE, as well as come to the JP Forum on March 28th to listen to their testimonies!

This program is free & open to all!