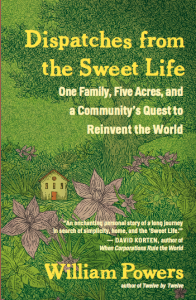 Delighted to share with you that award-winning author William (Bill) Powers is launching his new book this fall and we’d like to have you part of this exciting moment, and the critical conversation this new book explores.

The underlying question so pertinent to our time “ whether academic, intellectual, spiritual or practical in nature – is this: How can one live fully, joyfully, sustainably, and in community while simultaneously healing the planet?

Bill’s new book, Dispatches from the Sweet Life: One Family, Five Acres and a Town Quest to Reinvent the World (2018) is a page-turning memoir that will stir readers to ask refreshing questions about global responsibility and the critical linkages between sustainability and personal happiness.

Bill’s current work in Bolivia offers a fascinating new dimension to his writing and decades of international development work. He is collaborating on the creation of an ˜ecological municipality and leading ground-breaking research that brings Bhutan Gross National Happiness (GNH) together with Bolivia vivir bien (˜living well) concept.

His writing and speaking struck a powerful chord at over a hundred venues in the U.S. and Europe, including keynote speeches at large literary festivals, dozens of major U.S. and European universities, and specialized private events such as the Chicago Council on Global Affairs and at Google Inc.

A penetrating account of what its like to move to the margins in our particular time and place. It will make you think, hard.  —Bill McKibben, author of Deep Economy and founder of 350.org

William Powers has worked for two decades in development aid and conservation in Latin America, Africa, and North America. From 2002 to 2004 he managed the community components of a project in the Bolivian Amazon that won a 2003 prize for environmental innovation from Harvard John F. Kennedy School of Government. His essays and commentaries on global issues have appeared in the New York Timesand the International Herald Tribuneand on National Public Radio Fresh Air. Powers has worked at the World Bank and holds international relations degrees from Brown and Georgetown. A third-generation New Yorker, Powers has also spent two decades exploring the American culture of speed and its alternatives in some fifty countries around the world. He has covered the subject in his four books and written about it in the Washington Post and the Atlantic. Powers is a senior fellow at the World Policy Institute and an adjunct faculty member at New York University. You can see more HERE.