On a cold and wet January night, over 100 people packed into the First Baptist Church in JP to hear Mario Alberto Arrastía Ávila finally speak. It had been months since we began waiting for him to receive his visa to the US. Activists and neighbors working on issues ranging from freeing the Cuban 5 to climate change and energy gathered together to welcome Mario in celebration of the recent historical thawing between the United States and Cuba. 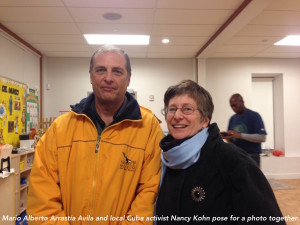 Mario, Cuba’s leading Energy Efficiency and Renewables Educator, emphasized the scientific nature of his US speaking tour before alluding to the immense potential for growth in both the US and Cuba as a result of new diplomatic openings.   Candidly, he questioned why everyone is so curious about what is going to happen to Cuba and less so about how these changes are going to affect the United States.  “Both countries have a lot to learn from each other,” he reassured the audience.

Cuba’s Energy Revolution is one of the most ambitious energy renovation programs to date.  “The Special Period in Time of Peace” aka the economic crisis in Cuban history starting in 1989, necessitated country-wide reforms in health care, agriculture, transportation, and energy. 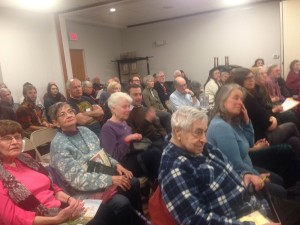 Here are some of the Revolution’s accomplishments to date: 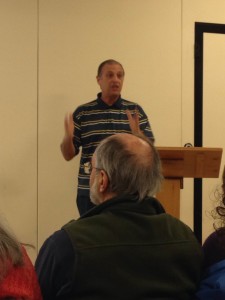 Mario highlighted many other significant successes including Cuba’s move to decentralize power in order to be better situated in the future for clean energy infrastructure.

The largest factor inhibiting the continued shift to cleaner energy for Cuba, Mario emphasized, is primarily a financial one.  The Cuban economy continues to struggle despite successfully reinventing itself after the dissolution of the Soviet Union.

The Cuban Energy Revolution thus far has been about energy efficiency.  With more funding, Cuba hopes to move toward sustainability via renewables.

When questioned about “outside the box” solutions such as solar cookers and bicycle powered machines, Mario responded that such solutions may not feasible saying, “You can’t propose a first world solution to a third world problem.” His perspective was insightful, realistic, and very telling.

To get involved in New England’s own energy efficiency revolution, join with others at Co-op Power to use less energy and meet more of your energy needs with clean energy. You don’t need to be a member to take advantage of our cost-saving programs, but you’ll save even more if you join! Co-op Power is a multi-class, multi-racial movement for a sustainable and just energy future. Click to learn more about Co-op Power and our Community Energy Co-ops in Southern Vermont, Metro Boston, Blackstone Valley (Worcester and Providence), Franklin County, Hampshire County, and Hampden County.