by Hero Ashman and Tracy Bindel

Not an Energy Issue but a Public Safety Issue
The Jamaica Plain Forum hosted Diane Turco and the Cape Downwinders, Dick Clapp and local JP residents and activists for a lively discussion on the perils of the Pilgrim Nuclear power plant in Plymouth, MA. Speakers emphasized the threat to public health and safety that the Pilgrim Nuclear poses to residents living as far away as Boston. Local public health expert, Dr. Dick Clapp expounded on the detrimental health consequences of living near a nuclear power plant, reminding the audience nuclear health risks are not just in the event of an accident at the plan. There is statistically significant data showing that people living near a nuclear power plant are more likely to have leukemia and thyroid cancer. 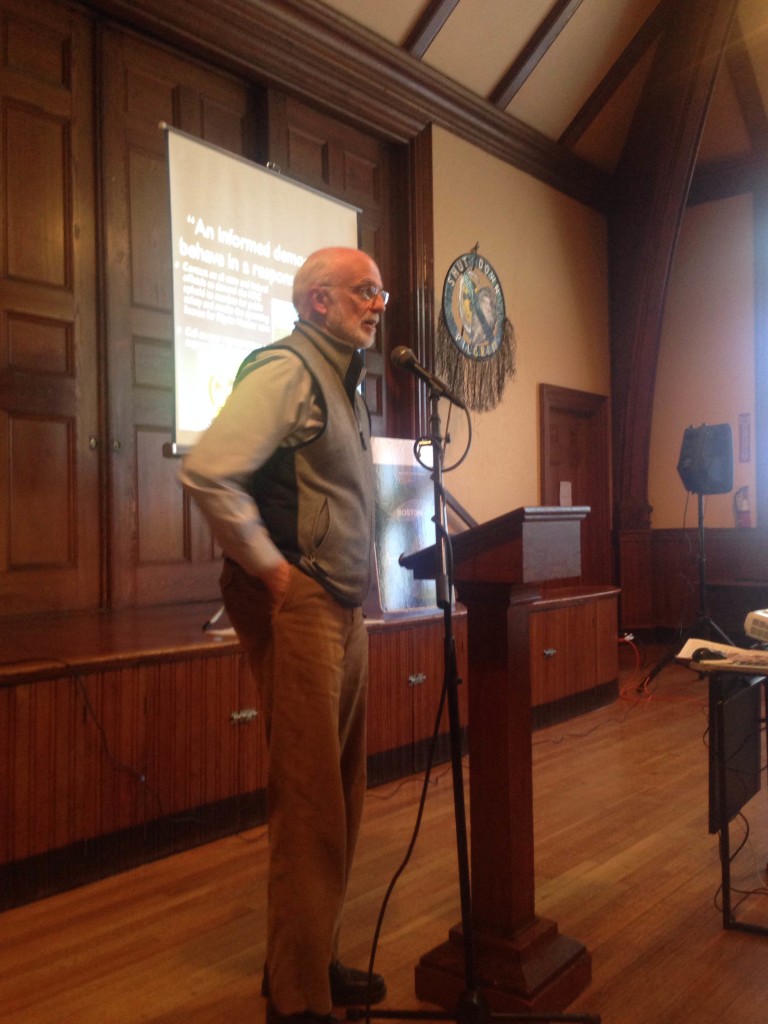 The Pilgrim plant, which was built in 1972, has the same design as the Fukushima nuclear plant in Japan, a GE Mark I boiling water reactor. A primary concern is the spent fuel pool.  Originally designed to temporarily hold 880 spent fuel assemblies, with no federal repository as planned, the license was amended to accommodate the nuclear industry. The Pilgrim pool, outside the main containment area in the attic of the building, now holds over 3,200 assemblies, four times more than the original design. Dr. Gordon Thompson completed a study for the AGO in 2006 which determined that the densely packed re-racked fuel is dangerous.  A spontaneous fire could occur with resulting damage of 24,000 latent cancers, $488 million in damages, and hundreds of miles downwind contaminated. Entergy is currently moving fuel from the pool so they can refuel this spring. According to Pilgrim Watch, an organization aiming to increase public awareness of issues pertaining to the nuclear plant, there is a high risk that the casks could crack and there is currently no system in place to adequately monitor the canisters. 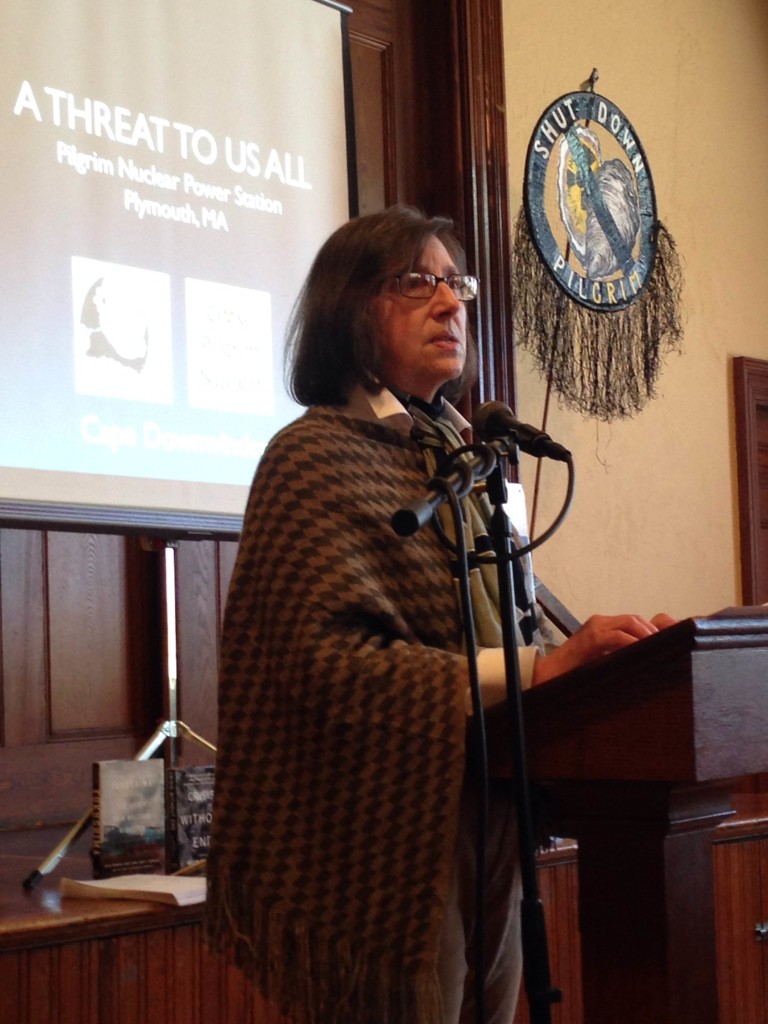 In December 2014, the Yankee Nuclear Power Plant in Vermont was closed down, despite its operating license having been renewed for a further 20 years. Although the plant was closed for economic reasons, protests against the plant had been increasing since the Fukushima disaster in 2011 and groups such as Cape Downwinders are hopeful that the anti-nuclear momentum can be directed towards Massachusetts’ only nuclear plant. The Pilgrim Plant’s original operating license expired in 2012, but Entergy, the energy company who operates the plant, successfully received the license renewal by the Nuclear Regulator Commission for twenty more years in May 2013. This was despite the objections of then Governor Deval Patrick, who requested the NRC withhold relicensing so public health and safety concerns could be addressed. Diane Turco and the Cape Downwinders are leading the campaign to have the license revoked before it expires.

There is currently support in the state government by Cape Cod Senator Dan Wolf and Representative Sarah Peak to shut down Pilgrim.  While only the NRC has the authority to close a nuclear reactor, our legislators have introduced bills to address economic and public safety concerns. Organizers continue to stress the importance of writing to local newspapers, calling the state house, and getting the word out to neighbors about the issue to demand that elected officials take action through state legislation.

During the question and answer session several people spoke about the media blackout that followed the Fukushima disaster and the lack of willingness of the press to run stories on the nuclear plant. The health risks were elaborated on and one participant explained that in her hometown the construction of a Waste Isolation Pilot Plant (a site licensed to permanently dispose of radioactive waste) had lead to the prevalence of thyroid problems in local residents. A couple of audience members raised the question of alternative energy and wondered whether, if better regulated, nuclear energy could be utilized as a form of green energy. Diane stressed that the current issue of nuclear power was one of safety and not energy, but regardless, nuclear energy in the form we use it now is not a “green” alternative. 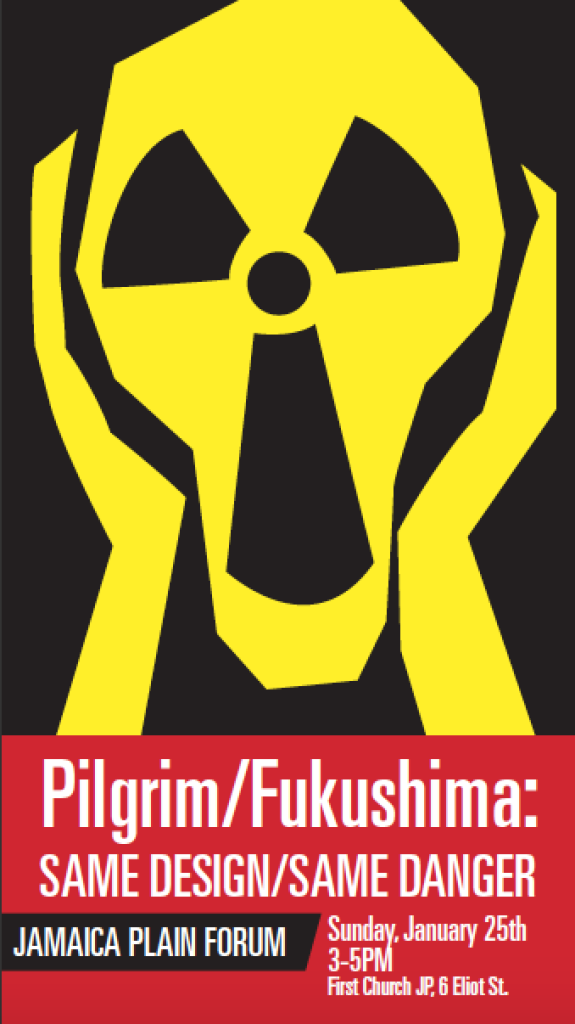 Discussions over what steps to take next continued after the event had ended and there was consensus that more people in JP and the greater Boston area needed to be better informed as to the risks caused by Pilgrim. If you would like to find out more information on the Cape Downwinders you can visit their website, which includes learning resources and information on upcoming events. You can also visit the Nuclear Regulatory Commission’s site to see their plan for the Emergency Planning Zones. For more information check out the Pilgrim Coalition or the Pilgrim Watch.

To arrange for an educational program for your community to learn more about the threat from Pilgrim and what you can do,  please contact Diane at tturco@comcast.net

This event was co-sponsored by Co-op Power, a multi-class, multi-racial movement for a sustainable and just energy future.