by Maxine Roberts and Tracy Bindel

To listen to the talk, click here.  You can also purchase Andy Zimbalist’s recent book, Circus Maximus at Papercuts JP.

On June 15, 2015, over 100 passionate members of the JP community attended a talk by Andrew Zimbalist, sports economist, concerning the possibility of Boston hosting the Olympics in 2024. Zimbalist voiced that he is against the Olympics being held in Boston, stating that “given the structure of the Olympics, it is not possible to have any gains.” The city itself will not benefit from hosting the games but many corporations and construction companies will profit incredible amounts.

No Long Term Economic Gains for the City 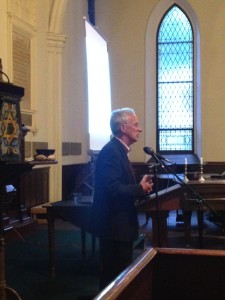 Zimbalist gave examples of Los Angeles and Barcelona as two of the only cities who have managed to benefit from hosting the Olympics, though both cases and their gains were due to rare exceptions. Zimbalist discussed Barcelona in a way that allowed the audience to understand more about the structure of the Olympics, as well. He pointed out that Barcelona was able to flip the “norm” of how the Olympics comes to a city. This was helped by the fact that Barcelona also entered into the process with a plan in mind for economic reconstruction, which had caused the Olympics to have to fit into their premade economic plan, rather than vice versa as it usually goes.

Normally, the Olympics committee sets the pace for the potential host cities, and then the host cities have to struggle to accommodate all of the costs.Zimbalist explained that part of the reason for such high expenses is due to the highly competitive structure of the Olympic host city “race.” This “race” consists of the first bid, which then becomes a competition between individual cities within countries, and then spreads internationally. He points out that while the projected cost of one of the Olympic Stadiums to be built in Boston is $550 million, this stadium does not have near the capacity of the stadiums that already exist in other bidding cities.. Zimbalist stated, “If you’re not going to match [other bidding cities], there’s no point in competing” suggesting that the initial bid will likely have to increase to stay in the game.

He also shed light on the fact that large money-draining construction projects like Olympic villages and venues tend to affect communities experiencing poverty much more negatively than privileged communities. Referring to the construction of the Olympic Village in Atlanta that leveled a low-income, minority community, Zimbalist reiterated that the Olympics being in Boston would do more harm than good, particularly to low-income areas such as those around Franklin Park.

No Impact on Tourism

Zimbalist went on to dispel one of the most popular myths concerning hosting the Olympics – the alleged boost in tourism. Overall, studies have shown that tourism patterns are largely unaffected by the Olympics. While there are large amounts of tourists that will come to see the Olympics specifically, there is a similarly large amount of tourists who will avoid the Olympics. This means that the city would literally trade an Olympic tourist for a regular tourist, creating a ratio of 1:1.

Andrew Zimbalist provided hard facts and numbers regarding Boston hosting the Olympics in 2024 and urged us all to continue to organize against the Boston 2024 bid that will not serve our city, economically or otherwise.

You can get involved with our cosponsor, No Boston 2024, as well as the Franklin Park Area Stop Boston Olympics. There is a mayoral meeting on June 30th at the English High School on 144 McBride Street in Jamaica Plain at 6:30pm for those interested in furthering the conversation and learning more. Please join No Boston 2024 at 5:45pm.

More Info About the Talk

Richard Heath in the Jamaica Plain News “New Grassroots Group Aims to Keep Franklin Park Out of the Olympics.”