The US premier of Haitian Perspectives In Film took place at this week’s Jamaica Plain Forum. Six short documentaries made by six newly trained Haitian filmmakers were screened to an audience of more than 100 people. The screening was led by a local organization called Community Supported Film, which had run a five week intensive training course in Haiti in 2014 for Haitian storytellers. The aim of the project was to counteract the singular narrative of Haiti as a country permanently damaged by the 2010 earthquake, and to lift up local voices as they share their important stories.  What struck me most about the movies was the capacity and creativity evident in the Haitians’ work – both those making the documentaries and those starring in them.

The dominant portrayal of people within disaster or war torn nations, especially those recovering from wars and natural disasters, is that they are in constant need of outside help. While it is important for an international community to offer help and assistance to countries in need, by purporting a narrative of foreigners coming in to help ‘re-build’, ‘re-construct’ and ‘re-develop’ we ignore the work that is already being done by Haitians, in Haiti, for other Haitians. 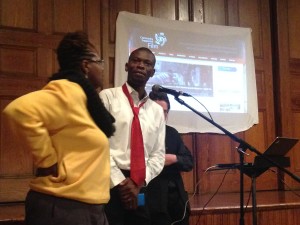 One documentary, created by Bichara Villason, filmed a group of construction workers re-building houses for people whose homes had been damaged by the quake. The project manager explained the communal process of identifying who to build for, constructing permanent (rather than temporary) houses and taking the steps to ensure people’s homes were protected by law. The title of this piece was “Owned or Occupied.” The ownership the community had over their work was contrasted with the work done by occupying NGOs: arriving from abroad, building temporary shelter and leaving. This type of work is not covered by mainstream media outside of Haiti because it doesn’t fit with the narrative of helplessness that accompanies many post-earthquake news reports.

For me, the documentaries clearly captured the connection between work and identity. This was demonstrated in the documentary “Threading the Needle”, which told the story of a woman who had started a curtain making business in order to provide for her family. Her work not only brought her a livelihood, but also the ability to reach out to other women in her community by teaching them sewing and business skills. The documentary successfully conveyed the feeling spoken by the woman, that hard work was needed and willingly given to get the country back on its feet. The importance of work was established for individual, community and national identity.

The documentaries were successful in expanding many stories we have of the world: the story of disaster relief, the story of community resilience, the story of who gets to tell the story.  They illustrated brilliantly that there is a huge diversity of work that people do. A community organizer, who was interviewed in the documentary “Ghetto Clean, Ghetto Green,” related the work him and his community were doing to improve life for children in his neighborhood with the Haitian system of Kombit. Kombit refers to a system of collective work undertaken to achieve a common goal; it is based on sharing rather than selling. It is clear that the work done by the Haitian filmmakers and the Haitians in the documentaries was not done merely to earn a living. The work they did utilized their energy, created change and brought them a livelihood based on more than having shelter and food, but included shaping and upholding a community identity.

I think it would benefit us all to remember that work within the home, volunteer work in communities, work with purposes other than profit, is not only crucial to our economy but it is constructive of the creative, generous and productive people we are. The documentaries really brought this point home to me.

You can pre-order the DVD of Haitian Perspectives In Film at CSFilm’s website and explore the site for more information on the films. Don’t miss JP Forum’s next event “It Runs In the Family: On Being Raised by Radicals and Growing Into Rebellious Motherhood with Frida Berrigan”  on Thursday, 23rd of April.