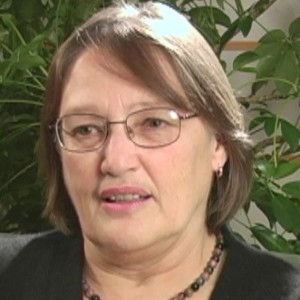 In December 2012, Katherine Power spoke to the Jamaica Plain Forum about seeking peace and reconciliation in the wake of being an accomplice to a heinous crime.

In 1970, Katherine Power was a Brandeis student who went from being an activist against the Vietnam War to joining a guerrilla revolutionary group. In the course of a bank robbery in which she drove the getaway car, Boston police officer Walter Schroeder was killed. Power fled from justice but surrendered 23 years later when she realized that she could no longer hide her past from her teenage son. She plead guilty to charges of armed robbery and manslaughter and served six years in prison. Katherine Power uses her very public inner journey from guerrilla to fugitive to prisoner to penitent to explore the politics of rage and the possibilities of peace.

Writes Katherine of peacemaking within her own family: “I remember when my son came home from night school and told me about a film his teacher had shown, a film about the schools in Cleveland with holes in the walls, outdated textbooks, and inadequate teachers. I could hear the hurt and outrage in his voice as he recounted how the city students’ conditions compared to those in the schools of the wealthy suburbs. I felt both tenderness and fear that he would be blinded by this outrage and throw his life away and others’ along with it. As I had when I was just his age. I asked him how he would live with knowing this—how wrong and damaging it was, how much he wanted to make it change—without destroying his life. Together we had no answer except to stay always aware of the question, to remember that the blindness of the rage was not the only possible place from which to act.

I have had to confront the singular reality of violence, to see the pain on the faces of victims of my outraged righteousness. And yet I cannot give up consciously looking at hurtful injustices that demand a response. Practical Peace is my ongoing work to make change without making enemies.”