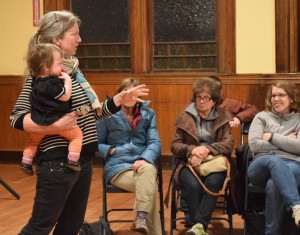 The Jamaica Plain Forum recently hosted mother and author Frida Berrigan. Berrigan, the eldest daughter of Philip Berrigan and Elizabeth McAlister, radical peace activists, read from her new book It Runs in the Family: On Being Raised by Radicals and Growing into Rebellious Motherhood. She contrasted stories of her own childhood with her experience raising her own children. Her reading, and the proceeding discussion, opened up many questions about what families and communities can look like in an increasingly violent world.

Berrigan described her childhood growing up in Jonah House, a faith-based community established by her parents, centered around non-violent resistance. Her and her two siblings were quite literally raised by a village, cared for by numerous community members while her parents lived out numerous jail sentences as a result of their non-violent demonstrations. She recounted through a ten-year-old’s eyes the difference of being looked after by “good lunchers,” those who gave them cookies and planned weekend excursions, and “bad lunchers,” those who packed stale bread and declined requests to play basketball. Berrigan’s childhood was clearly formative and full of love even though she experienced constant fear that came from being exposed to many of the ills of the world. She watched the news and listened to the dinner conversations and knew very well that a nuclear war was impending. As a parent, she described the joy she gets from watching her daughter draw flowers instead of nuclear bombs, but also of her wish for her daughter to grow up aware of the violences of the world and the privileged position she occupies.

Berrigan’s parents, whether intentionally or not, challenged what it means to be a family. Their family did not revolve solely around themselves, it existed as part of a community, both at Jonah House and in the wider peace movement of the time. This world demanded of her parents that they spend time in jail as well as time at PTA meetings. In turn, being a family challenged Berrigan’s parents ideas about what it meant to lead peaceful, resistive lives. At the start of the book Berrigan asks “Can you be fully committed to changing the world and change diapers at the same time?” and confirms that her parents didn’t think so. They never planned on having children, in fact.

She demonstrated the intentionality of her parenting when asked about how she talks to her son about racism and police brutality – not typical topics to engage a two year old in. She told the story of when her and her son attended a funeral of a black man who was shot by the police, a relative of many of her son’s playmates. At the funeral, her son wanted to play with his friends and didn’t understand why they were upset. Berrigan used this event as a teaching point to her son, whom she mentioned adores police officers in uniform. She clearly communicated that police officers killed his friend’s uncle and that is why his playmates were so sad, shedding light on a more complex narrative than the “hometown hero” story so many white children have the privilege to believe.  Placing issues in the context of her children’s lives not only seemed a great way to help them learn about the world but also an affirmation that children’s experiences are just as much something to learn from as adults experiences. 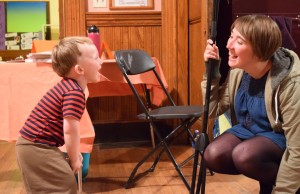 Berrigan was full of conviction in her desire to learn from her children – their kindness, their eagerness, their willingness to forgive. She said lightheartedly that Seamus, her son doesn’t have an ego to uphold. Her parenting style challenges the often unquestioned power dynamic between parents and children. She also challenges the notion that factual knowledge and experience are superior lenses to view the world from; childlike exploration and imagination are just as powerful frameworks for change.

Throughout the talk, I was struck by our culture’s promulgation of the nuclear family. People on all sides of the political spectrum tout the benefits of strong families, and within that is a rigid assumption of what a family looks like. Are families mechanisms of separation? Does neoliberal ideology depend on the family unit? Can families be tools of resistance? These questions were not specifically addressed by Berrigan but she certainly offered a new idea of what the family can be and what it can be used for. Families are not hierarchical units that we divide societies into. Rather, a family consists of equally valued people, learning from and with each other, and importantly, spring boards for engagement with the wider community.

You can read some of Berrigan’s own writing on her blog, Little Insurrections, or purchase her first book It Runs In the Family.