Shortly after the West Roxbury Lateral Pipeline: Teach In event in early May, a few Boston area activist engaged in civil disobedience to stop the pipeline from being built.  Check out this post by Chuck Collins about a new red line, not unlike the Paul Revere trail, in Boston! 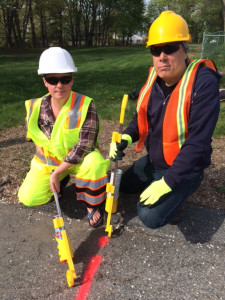 RISKING ARREST: I PAINT THE LINE, BECAUSE YOU’RE MINE by Chuck Collins

This morning, I engaged in an act of reluctant civil disobedience.

Here’s why: a Texas-based energy corporation, Spectra, is about to break ground on a high-pressure gas pipeline in my neighborhood. We’ve done everything we can do stop it – and we have no further recourse.

All of our elected officials – city, state, and federal –have tried to stop this project. The City of Boston and our heroic Congressman Stephen Lynch have “intervener status” –and have tried to delay this project for further review.

In March, the Federal Energy Regulatory Commission (FERC) approved the West Roxbury Lateral Pipeline from Westwood to a metering station to be set up across from the crushed stone quarry, where they still use dynamite to dislodge the boulders it crushes. The gas pressure is 750 pounds per square inch when it enters the West Roxbury neighborhood. A typical house is fed with pressure of 0.5 PSI or less.

On April 29th, the Boston City Council voted unanimously to investigate the public health issues and deny permits to the project. But they have been ignored. Spectra Energy plans to break ground within weeks.

There are a number of reasons why I — and thousands of other neighborhood residents — oppose the West Roxbury Lateral Pipeline. First, it’s a health and safety risk –its route goes past several schools and ends at a quarry with active blasting.

Secondly, it is fracked gas – extracted from the shale regions of Pennsylvania and south, jeopardizing the water supplies of these communities. The gas is for international export (more below).

Finally, we have a climate crisis and should not be spending billions on new fossil fuel infrastructure. Rather, we should be investing in conservation and renewable energy. We should be reducing our demand through conservation and plugging up the over 3500 gas leaks that already exist in Boston and cost ratepayers an estimated $80-90 million each year.

On Monday, May 11, I helped organize a teach-in about the pipeline at Theodore Parker Church. I spent the previous weekend leafleting and talking to neighbors at Roche Brothers market.  I was struck by how many of my neighbors are not aware of the pipeline project.  Those who do know about it are tremendously concerned, but feel powerless to stop it.

In the spirit of Paul Revere, we painted a red “Freedom Trail” along the pipeline route. We aim to alert our neighbors to both the local threat to health and safety – and the foolishness of new and unnecessary fossil fuel infrastructure.  I took action with my friend Andree Zaleska, someone I have tremendous admiration for — and someone who helped educate me about these issues in 2006.

Gas advocates claim this pipeline will serve local gas needs.  But 95 percent of West Roxbury residents already have access to gas.  If we want to increase supply, we don’t need a mega-high pressure pipeline.

The Algonquin and Kinder-Morgan pipelines are driven by transnational energy corporations looking to export gas to Europe and make huge short-term profits.  But our community will have to pay for the infrastructure and the long-term risks.

After finishing our painting –Andree and I turned ourselves in at the West Roxbury Precinct 5 station.  We spoke with police officials and two detectives –who will decide what to charge us with.  I took this risk because I feel that the risks of inaction are even greater. I fully take responsibility for my actions and their consequences.  I promise to return to nonviolently resist the construction of this pipeline.

It is alarming to me that a remote and unaccountable federal agency, the Federal Energy Regulatory Commission (or FERC), overrides all local concerns. In the words of Robert Kennedy Jr., FERC is a ‘rogue agency, a captive agency,’ controlled by the big energy corporations.” Unless we come together to stop them, they will permit a high-pressure gas pipeline into the heart of residential Boston.

Yesterday, on May 14th, I attended the FERC meeting in Washington, D.C. I was in town on a business trip and I wanted to see first hand the federal agency making decisions on behalf of Bostonians. When I signed in to attend the meeting, FERC put a blue dot on my nametag, indicating that “I was on a list” and would be allowed to watch the hearing on TV in an overflow room. I have never been to FERC or done anything to deserve such treatment.

I spoke to the head of FERC security –gave him my business card –but I was denied access to the public commission meeting. All the oil industry lobbyists were allowed in. Only after the office of my Congressmen Stephen Lynch intervened was I allowed into the last 30 minutes of the Commission meeting. FERC security apologized for my exclusion. But on my first visit ever to FERC, I experienced the Police State intolerance of a federal agency that buffers itself from the citizenry.

At the FERC Meeting, there were representatives of over 25 other communities present, also protesting FERC’s deaf ear to local community concerns. Most were also excluded from the Commission meeting. Some of them objected and were arrested. It was appalling.

Three of the five FERC commissioners have long historical ties to the natural gas industry. There is no one sitting at the table with a broader view of where energy policy needs to go in the future. As Sandra Steingraber said at a previous FERC meeting, all our efforts to put in place innovative renewable energy approaches “are threatened by FERC-approved fossil fuel infrastructure projects. They are a ball and chain that keep us bound to a ruinous past and thwart our progress.”

We have exhausted almost all of our local recourses.  We have petitioned our elected officials, conducted educational forums, knocked on doors.  Civil disobedience is an appropriate response to an unjust and anti-democratic process.

Chuck Collins is a member of First Church Jamaica Plain and co-chair of Divest-Invest, a national movement to shift investment out of the fossil fuel sector into safe and renewable energy.