In early February, just under a hundred of us gathered to hear Toby Hemenway lecture on permaculture, it’s development and why it is a necessary part of our vision of a new world. Hemenway is a renowned permaculture and ecology expert and authored the book Gaia’s Garden: A Guide to Home-Scale Permaculture – the world’s bestselling book on permaculture for eight years running. 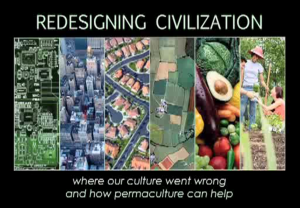 Permaculture is an ecological design approach that offers powerful tools for the design of regenerative, fair ways to provide food, energy, livelihood, and other needs while letting humans share the planet with the rest of nature.

How did Permaculture Develop?
To set the scene, Hemenway first gave a comprehensive anthropological narrative of how cultures had developed based on how they collected their food. He broke down the three types of cultures in the following categories:

How did we become an Agrarian Society?
Hemenway explained that there are competing theories as to why we became an agrarian society. The first is that life was going well until we started to use up too much of our resources and were forced into more ‘efficient’ means of production. The second is that we were doing alright until the climate started getting colder. Both of these narratives rely on the idea that scarcity led to an intensification of the food production process. However, Hemenway suggests that viewing the world through the lens of scarcity has led us to become less, not more, sustainable in our use of nature.

What are the Problems with Agriculture?
Hemenway stressed the idea that agriculture is equivalent to the domestication of the human species. It creates a dichotomy between wild vs. tame, which prevents humans from working as a part of nature – instead we try to harness nature for our own terms. This has happened through the spread of agriculture and Hemenway elaborated on the structures and consequences that accompany an agrarian society:

According to Hemenway, the world created by agrarian societies is unhealthy, unequal and makes us afraid of scarcity. Many in the audience agreed that this was an unsustainable future, but it is challenging to imagine a system different to the one we know and rely on.

Permaculture as the Alternative!
After the doom and gloom of the first part of the lecture, Hemenway raised the spirits of the hall by offering an alternative: permaculture. He described permaculture as a new type of horticulture, where people work with, rather than against, nature in order to tend to plants that in turn provide us with food. The ethics of permaculture asks three important questions of designed ecological systems:

The emphasis on sustainability and minimizing our impact on nature means that another important question to ask is when to do things where? Hemenway explained that we need to build up local economies that respond to local conditions. He illustrated the places we can look for produce in a diagram similar to the one here.

People in the audience were convinced by Hemenway’s conclusion that alternatives to the food structures we have in place now need to be created. Several audience members questioned the scalability of permaculture projects, especially in countries suffering from a severe lack of food. Others made connections between permaculture projects and movements for deeper democracy and greater levels of civic engagement. The night ended on a high note and neighbours were encouraged to attend Hemenway’s permaculture workshop at the Boston Food Forest.

Next Steps
For more information on Toby Hemenway’s work you can visit his website. You can also visit the websites of some of the successful permaculture projects that Hemenway mentioned in his talk: