The  5th annual State of Our Neighborhood, organized by JPNET, JPNDC, SJPHC, ESMS, JP Forum and numerous neighborhood organizational co-sponsors was held on Febuary 26th. Over three hundred people came together to discuss housing justice issues within Jamaica Plain and Boston. The audience heard from several local officials as they committed to promote just-cause evictions, secure more affordable housing and fight for livable wages. Whilst the dialogue focussed on rising rents and increased evictions, Malia Lazu, the mistress of ceremonies, began the night by grounding the issue in its broader context: racial justice.

Racial equity in JP, a neighborhood where almost half the population are people of color like in the city of Boston as a whole, was addressed in several performances before the panel discussion got underway. Through a series of sketches, ¡Acción! Community Theatre and Hyde Square Task Force raised the question of how the Latino community is affected by gentrification. JP is home to the largest Latino business district in New England but we saw in the documentary Ain’t Know One Can Afford This, by local filmmaker Helen ‘Homefries’ Matthews, that independently owned businesses are being forced out of JP by rising rents – again mirroring the trend throughout Boston, the most rapidly gentrifying city in the US.

Lifting Up Local Voices
JP residents  shared their own stories of injustices – personal stories which connect to a broader narrative of injustice. Malia Lazu emphasized how important it is that we support the people who will capture our stories, tell our history and in so doing, legitimize our place in the neighborhood and society at large.

Another means of legitimizing and amplifying people’s call for racial equity is by demanding a city government that reflects the racial and ethnic diversity of Boston. At the start of the evening Abigail Ortiz, on behalf of the Boston Racial Justice and Equity Initiative, asked the audience to sign a petition for Mayor Walsh to establish a Racial Justice and Equity Commission that would guide every city department in setting goals to reduce inequities in their area of work. She stressed that the Mayor needs to create a Boston for Everyone.

Jamaica Plain for Whom? 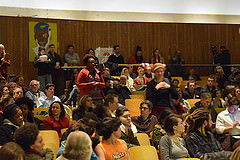 The question of “Boston for whom?” was brought into the context of the State of Our Neighborhood with Lazu’s more specific “Jamaica Plain for whom?”. Unquestionably, land – and by extension property rights and house prices – has been used for centuries to continue oppression. This oppression is based not only on economic status, but also on race. This fact led to Lazu asking several more questions of the audience: how has land ownership affected your life?  Do your people have a history of being displaced?  Have you lost neighbors who helped create this community due to rising pricing?

Ultimately, are we going to recognize the symptoms of property injustice and racial inequity in Jamaica Plain and demand action against it?

Action For Racial Justice in Housing
It became clear through the night that taking action against racial injustice could take many forms. Representatives and elected officials discussed seven specific topics aimed at planning, regulating and providing resources for a more equitable JP. Check out the  Asks from SOON 2015.  Two topics which emphasized the role that housing plays in systemic racial inequality were:

Promises from Local Officials
Indeed, one of the crucial aims of this years’ State of Our Neighborhood was to expose the economic realities, specifically the housing conditions faced by people in JP, and to further demand that officials take action to improve them. The final part of the evening was reserved solely to hear commitments from the representatives and local officials. Click here for the SOON 2015 Commitments.

Uncomfortable and Challenging Issues
At one point during the discussion a man from the audience called out an elected official for making light of her experience having been arrested while protesting an eviction. As a young man of color his experience with the criminal justice system is markedly different from the elected official’s. His point highlighted the fuller context of the night’s topic: it is not enough to tackle housing injustice, we must also examine the structures of racism that underlie many injustices; injustices which include housing, but also include mass incarceration of men of color and under representation in local government, to name a couple. It was an uncomfortable moment for many in the audience and on stage, but as Malia Lazu had pointed out at the start of the night,  “We go deep here, we talk about issues that help us expand and maybe even get a little uncomfortable.”

Summing up the magnitude of the challenges ahead, but also the feeling of optimism that lingered throughout the night, Ayanna Pressley, a Boston city councillor, concluded that “in order to meet our shared ideals, we need to be challenged.” The State our Neighborhood challenged those that attended to recognize those “shared ideals” and charged them to amplify their work to bring them about.